The Business Lesson I Learned Fighting (and Beating) a MiG-29

“Remember, people will judge you by your actions, not your intentions. You may have a heart of gold — but so does a hard-boiled egg.” – Anonymous

The hands-down, number one dream of a lifetime for any F-18 fighter pilot is to fight against Russian-made MiG aircraft. And the only thing better than fighting one is to fight one and win.

I have done both.

But first, lest you think I am divulging some deeply hidden government secret about an air battle that “never happened” over some country that “doesn’t exist,” I should say that while the battle occurred between two real-life airplanes in real-life air, both of us were using simulated missiles. In other words, the loser did not actually blow up. The only thing at stake that day was bragging rights and a round at the bar.

What made things tough for me was that the German pilot flying the Russian-made MiG-29 Fulcrum was the commanding officer of the German squadron — and I was just a young pilot.

While he had almost 20 years under his belt, I had about two. Add to that the fact that his airplane had superior turn performance and better missiles. I was at a significant disadvantage.

My heart was pounding.

One-against-one fighter combat is like a chess match. Both pilots do their very best to make perfect decisions with perfect timing.

The key to winning this type of combat is to think just ahead of your opponent: to anticipate his move and react accordingly. While both pilots will likely make many small mistakes during the course of a dogfight, the pilot who emerges as the victor will be the one who minimizes his mistakes while capitalizing on his opponent’s mistakes.

I’ll share the story of what happened that day so you can imagine it in your mind’s eye:

Imagine two airplanes flying directly at each other at about 850 miles an hour and then passing each other about 500 feet apart — not close enough to see the whites of our eyes, but pretty close nonetheless.

That’s me in the “good guy” airplane. Here’s what I am seeing. He turned into the vertical, so I did the same, both of us pulling over seven times our normal weight and struggling not to black out from turning so hard.

After we met again, we had both flown nearly flawless maneuvers, leaving us practically neutral at 22,000 feet above the ground.

“This is not going to be easy,” I thought. “Just stay with the plan, fly smart, and don’t make any mistakes.”

Just as the MiG-29 passed down my left-hand side, I saw the pilot maneuver, leaving me a small window to counter and gain a much-desired offensive advantage.

It would be tough to explain just what he did wrong that day, but what I can say is that my window of opportunity would be open for about 3 seconds — after which it would snap shut and the chance would be lost.

Waiting for just the right moment, I quickly rolled my aircraft to the left using the fly-by-wire stick and rudders; then I pulled my nose to bear just in time to squeeze off a simulated missile.

Then I slowly pivoted the airplane using the rudders to align my plane with his flight path. At just the right moment, I squeezed the trigger on hundreds of simulated 20mm bullets. They went flying through the air and into his airplane.

I have often wondered why a young pilot in an inferior aircraft could have been so successful that day. In the end, I believe the key to success can be summed up in two words: Information and Implementation

For the two years leading up to that dogfight, I had been taught by some very capable pilots. Often they would create a scenario just like the one that led to my victory and teach me step by step how to counter a MiG-29.

That INFORMATION served me well. However, all by itself it still would have done me no good. IMPLEMENTATION was necessary.

I needed to see the MiG’s mistake, recognize it, and counter it at just the right time. Then I needed to get my airplane in a position to shoot a missile and bullets — all without giving up my own advantage.

I did not win because I was better. I won because I had good information coupled with good implementation, and this is a valuable business lesson for me.

There are really only four types of people in the world. You can see them in the four quadrants of this figure. 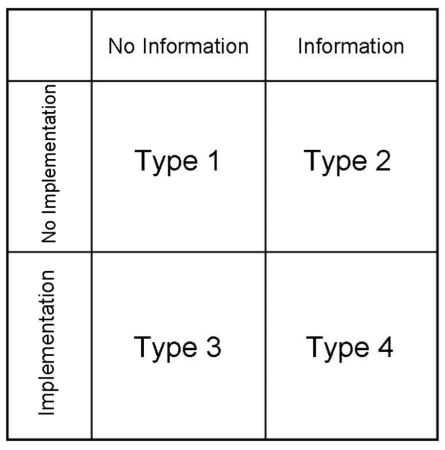 This is the proverbial couch potato. No need to feel sorry for this guy. His steady diet of reality TV, Home Shopping Network, food stamps, and government cheese is all his fault. He’s either convinced himself that he is not capable of doing anything, or he is just too lazy to do it.

The Bible has the best instruction for dealing with this guy: “If a man will not work, he should not eat.”

If you have gotten this far in the book, rest assured this is not you. But there is always a caution for all of us to avoid the temptation to be Type 1 lazy.

These are the know-it-alls who talk a big game, but never actually do anything. They are the ones who use the phrase, “I am going to…”

“I am going to quit my job and start my own business.”

The problem is that they never get around to actually doing anything. And to make matters worse, when you do something, they are the first critics in line to tell you the way you should have done it.

To avoid this Type 2 trap, take action, then talk about what you did — not what you are going to do.

You have to feel sorry for these guys — they are chickens with their heads cut off. They go from one thing to the next, trying, trying, and trying harder. They just never get anywhere because they don’t know what they are doing.

If only they would take a few minutes to get some advice, they’d be on their way to success. The problem is, they don’t have time to ask — they’re too busy doing.

I often picture this kind of person with his e-mail account open, Facebook notifications on, and his phone buzzing. You have to give him credit for doing something. It’s just that in all his doing he never gets anything done.

To avoid this Type 3 trap, keep in mind that motion does not actually signify progress. Jogging in place may be good for warming up, but you will never finish the marathon unless you start moving forward.

This is the goal. Strive to be as educated as possible about everything and anything that you do—then do it! If you want to lose weight, study nutrition and diet plans, take a course on fitness, and then get busy.

If you want to start a business, take a few courses from some competent instructors, then get that Web page up and start making sales. If you want to learn how to be a gourmet cook, buy a few books, then get cooking, partner!

Any way you shake it, strive to be a Type 4 person. The spoils do not belong to the smart or to the strong—they belong to the one who first points in the right direction (information) and then runs (implementation).

Much like my dogfight with the MiG-29, we will all have the opportunities of a lifetime.

It could be a home-run sale or that job interview you’ve been waiting for. It could be a million-dollar merger or it could just be a line that’s going to get you a date with the girl across the room.

In any case, the key to success is the same — coupling information with implementation.

The outcome of your chance of a lifetime is being decided right now. Whatever your goals may be, take the time to study and practice for that day, so when it does come, you will be able to squeeze the trigger on success.

Interested in learning more about how being a fighter pilot taught me valuable business lessons? Download a FREE Copy of my book!

Ed Rush is a world-renown speaker, a five-time #1 bestselling author, and a highly successful business consultant who was featured on CBS, Fox, ABC, and NBC. He has spent a significant amount of time in the cockpit of an F-18 fighter jet, so he knows the value of strategy and the power of focus. He has effectively taken the principles that he learned flying faster than the speed of sound, and translated them into good business. His clients range from small startups to multinational organizations, and include CEOs, founders, political leaders, sports teams, national universities, Hollywood stars, and even a contestant on Donald Trump’s The Apprentice. To buy any of Ed's books, visit his bookstore right now or hire Ed to speak at your next event.